Perth Airport Link – will it, won’t it happen? 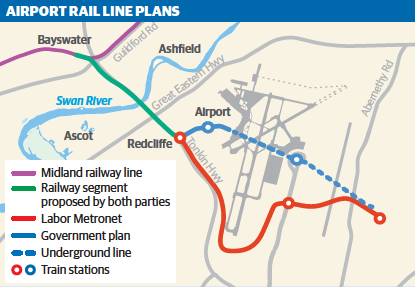 The cost of the State Government’s much-vaunted Forrestfield-Airport Link has blown out by $300 million, with Premier Colin Barnett revealing the cost will be $2.2 billion.

It will see a rail line head east from the Midland Line near Bayswater Station, tunnel under the Swan River and Tonkin Highway before reaching the airport and continuing on to Forrestfield.

The project – costed at $1.9 billion during the state election in March 2013 – will take the form of twin-bored tunnels and become the longest section of underground rail in Perth.

Three new stations will be built, transporting an estimated 20,000 passengers a year.

The government advised it would turn to the sale of government assets to help pay for the airport line. The state debt is now at $22 billion – and growing – so there is always a possibility that this project could be mothballed as the current Liberal government already has a history of mothballing major rail projects, such as the much-needed rail link to the Upper Swan suburb Ellenbrook and the Max Rail tram system.

The airport line was particularly important to service the eastern suburbs; the Premier had called for federal government funding for the project but it fell on deaf ears. Prime Minister Tony Abbott is on record for saying he would not fund passenger rail projects.

People of Perth will for the first time be able to catch a train to the airport, and importantly, this will also open up a brand new rail corridor to the eastern suburbs and foothills, allowing a 20-minute rail journey into the Perth central business district.

If the rail line goes ahead as planned, it will bring enormous benefits to airport passengers and staff working at the airport. In particular, this will be a boon for WA’s thousands of fly-in fly-out workers who will no longer have to drive to the airport and leave cars parked there for weeks on end. The route will go past the airport to Forrestfield.