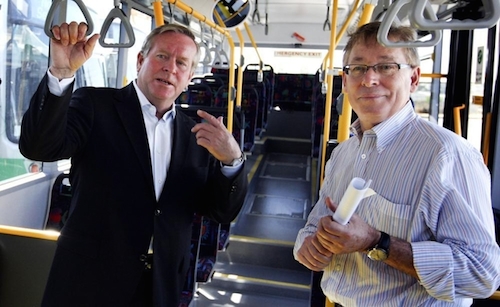 After numerous failings by this state government with regard to transport, someone needs the chop.

Recent disclosures and announcements clearly show the government has no long-term, integrated strategy for transport in this state.

It is bad enough the Federal Government is not funding any rail projects in this term and believe “roads are the way of the future” (Abbott), but this state government goes from one bad idea to another that has no coherence whatsoever. Its catalogue of mistakes includes:

The report highlights the absence of a timetable or funding for any of the proposed projects, yet we continue to experience the worsening congestion in the ever-expanding metropolitan area.

For our regional members, there is no additional funding for their roads, which are being churned up by trucks carting the extra grain not transported on the now-closed, tier 3 lines. There was $200 million allocated to upgrade them, but by the end of this harvest, the roads will be back to their original state and continue to deteriorate.

However, there was no independent estimate or analogy of the pros and cons, safety, environment, ease of use, etc.

While it might sound simple to get rid of an incompetent minister, another challenge has been the appointment of Mr Reece Waldock, CEO, PTA, since 2003.

In 2010, a further decision was made to integrate three departments – the PTA, Department of Main roads and Department of Transport (covering policy and planning development) by the then Liberal coalition government, which led to the creation of a Director General position, who answers directly to the minister. Mr Waldock was appointed to that position while maintaining his of CEO role. Since that time, and during 2012 and 2013, that department has spent in excess of $3 million on consulting.

This current madness and lack of direction has to stop.

At least the two previous ministers Mactiernan and Buswell understood their portfolio and knew the importance of an integrated transport system and how to give direction.

This is not a personal issue; it is a competency issue – a minister who exhibits neither direction nor understanding of his portfolio, with a clear catalogue of historical failures.